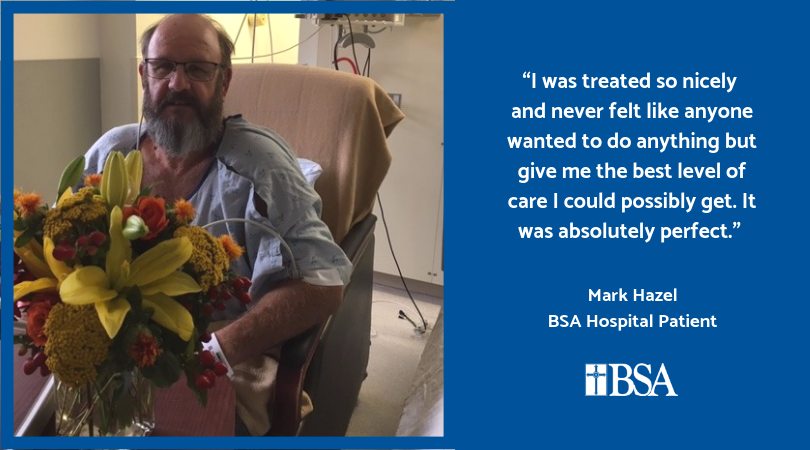 Sixty-three-year-old Mark Hazel has had four heart attacks in 17 years, the latest one due to a 100 percent blockage of a coronary artery. To help prevent future heart attacks, Hazel had 13 stent placements; 12 of which were done at BSA Health System. Stent placements are small tubes inserted into the coronary artery to help keep the artery open, promoting blood flow to the heart.

“I have 13 stents in me, I have no idea why I’m alive,” Hazel says. “Most people don’t go through four heart attacks and turn around to talk about it. I believe the good Lord is keeping me alive. This last heart attack was probably the hardest one I have ever had. It was totally different pain from the other ones. ”

Hazel had his last heart attack in November 2018. The day of the heart attack, Hazel was remodeling a kitchen, requiring him to lift heavy cabinets. He said the day had been stressful with more work requests coming in. As he was preparing to go to another client’s house, he experienced chest pain.

“I was picking up tools and got hit with a big, hard pain in my chest,” Hazel says. “It stumped me. I sat down on a nearby bucket and caught my breath.”

At the client’s house, Hazel’s pain worsened and he realized something wasn’t right. Exhausted and still in pain, Hazel drove back to his home. His health took a turn for the worse while unloading his trailer in his backyard.

“The next thing I knew I was laying on the ground,” he says.

Hazel called his wife, Joann, and explained that he didn’t know what had happened or why he was on the ground. Joann called an ambulance immediately.

While waiting for the ambulance, Hazel was able to climb back into his van and drive to the front of his house. When the ambulance arrived, Hazel was slumped over his console and unable to move.

“I couldn’t move because I was hurting so bad,” Hazel says. “I couldn’t get their attention so I just laid on the horn.”

Hazel was rushed to the BSA emergency room and within 45 minutes, he had a stent placed in his coronary artery.

“BSA has always gone above and beyond for me,” Hazel says. “Everyone is so helpful and professional. I was treated so nicely and never felt like anyone wanted to do anything but give me the best level of care I could possibly get. It was absolutely perfect.”

Hazel is appreciative of the readiness of his nurses and staff who were constantly there to monitor and check on him.

“My nurses were with me constantly,” Hazel says. “I love them to death. They did everything above and beyond for me. I would absolutely recommend BSA to others.”

After his heart attack, Hazel returned to work with light duty restrictions and was placed on a heart-healthy diet.

According to the American Heart Association, 210,000 recurrent heart attacks take place each year. When a heart attack strikes, every minute matters. If you are experiencing a medical emergency, call 9-1-1 for immediate medical attention.

To learn about BSA’s heart and vascular center click here.

‘We Don’t Suit Up to Lose’: A Panhandle Man’s Story of Survival