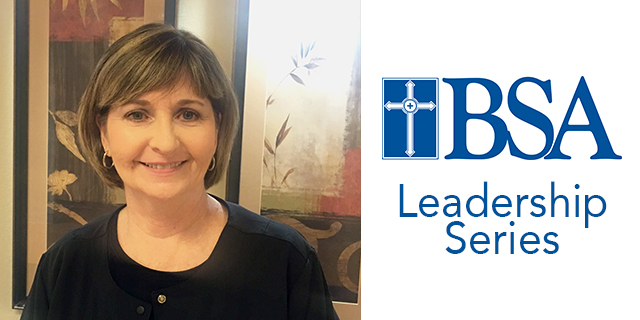 A rewarding, challenging and life-long career is a gift. At 21-years old, Cindy Casey, RN carefully examined her own thoughts about what she wanted to do professionally. Though she had not grown up with family in health care, she believed nursing was the clear path for her to take. “It was a true calling,” she explains. “It was laid on my heart that I would go into nursing. From that point on, I was focused and knew what I was going to do.” Her nearly instant loyalty to the field of nursing has led to a 36-year career that has tested her dedication, while providing opportunities to learn, lead and develop the next generation of nurses.

Today, Cindy leads a team of more than 80 nurses at BSA as the director of nursing services, overseeing the Resource Team, One Call Transfer, bed placement and house supervisors for the hospital. Cindy says that pivotal decision to become a nurse has, in fact, been a gift for her both professionally and personally. “I never looked back,” she says. “I can’t see myself doing anything else.”

The nursing program at Midwestern State University in Wichita Falls was completely full. A year-long wait to get into the program did not deter Cindy. Two years after being accepted, she graduated with her associates degree in nursing. Cindy worked at Bethania Hospital in Wichita Falls before moving to Amarillo a year later. In 1980, Cindy began her career at St. Anthony’s hospital, prior to the merger with High Plains Baptist Hospital in 1996 – at which time the hospital consolidated into BSA Health System. While at St. Anthony’s, Cindy moved from staff nurse to charge nurse, manager and director of the orthopedic, neurology and medical/surgical units. At the time of the merger, Cindy served as the manager of the orthopedic and neurology unit. Following reorganization of the nursing leadership, she moved into the director role once again.

Cindy has spent the majority of her career in the orthopedic unit at BSA. She recruited and trained nurses, learned to manage the day and night shift staff and felt completely at home. “I saw myself retiring from orthopedics,” she says. “I had become very comfortable and very close with all the staff. Over the years, I had hired the majority of them.”

Then an opportunity to take on a new role emerged in 2014 as the director of nursing services where she would be managing a team twice as large as she had become accustomed to and with more responsibility. “It challenged me in a positive way,” she says of going out of her comfort zone. “I had to start all over building those relationships with the nurses one day at a time.”

Though she had stepped in prior to the previous director’s retirement for vacation days or as needed, taking on the role full-time meant fully investing in her new team. “I don’t think you can be all business,” Cindy says of establishing rapport with her team. “You need to show a genuine personal interest in people, but they also need to know your expectations as an employee.”

Two years into this role, Cindy says it has taken every bit of that time to develop the relationships with her team. She is patient and perseverant, calling on her experience as a nurse and as a longtime employee at BSA.

“When we went through the merger in 1996, it wasn’t easy,” she says of combining two hospitals’ cultures. “We literally came from one side of the town to the other side of town – a Baptist hospital and a Catholic hospital. Leadership reorganized roles. After that we saw everything coming together. Our executive team brought us together and established our culture. We saw what our true mission and true culture was and we have not lost that culture today.”

It’s called The BSA Way – a patient-focused culture based on teamwork, kindness and respect. “It is providing the best patient care, being the best teammate you can be and representing BSA in a positive light here and in the community,” Cindy adds. “It is about truly being there for each other.”

The culture at BSA is told through stories like Cindy’s – of people who wanted to make a difference in the lives of others and have dedicated their lives to doing so. For Cindy, being a nurse has provided more than a career. It has provided a path to continue to learn and serve others. “It made me grow in different and very positive ways,” she says.

To learn more about current opportunities at BSA and to apply online, please click here.

Inside Careers at BSA - Nurse Practitioner