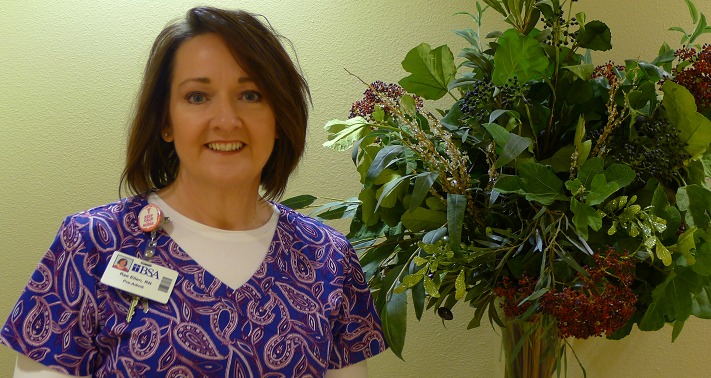 BSA nurse, RaeEllen Brown, RN, has been caring for patients at BSA for 30 years. Her years of service are an accomplishment that speaks volumes of her dedication. Yet, she may argue the last nine months have tested her dedication more than ever, especially during the recent holiday season. “I would text him pictures of food that people brought to work and say, ‘The struggle is real,’” RaeEllen shares of contacting BSA Fitness Specialist and certified personal trainer Jason Campbell when temptation tried to nudge her off course. “He is so amazing! He is the voice in my head: ‘It’s a choice.’ When I’m really struggling I hear him say: ‘Eat clean and work hard.’” RaeEllen may never have discovered those two statements or how her life would be different 84 pounds lighter, if it weren’t for a wellness challenge a co-worker suggested last April.

“I was working in clinical informatics at the time,” she adds. “One of our employees wanted to do a weight loss challenge. He challenged us as a department and we all joined in.” Initially, as is human nature, everyone eagerly agreed and began weighing in together at the BSA gym, where Jason kept everyone accountable. “No one could cheat on their weight,” RaeEllen says. But real change takes dedication – each and every day – even when schedules change and life gets busy. After a few weeks, RaeEllen was alone for the weekly weigh-in. “I went in and weighed by myself and took the opportunity to talk to Jason,” she recalls. “I told him, ‘I’m 50 years old, overweight and I need to get in shape.’”

Jason had a plan. “Fit Quest is a 12-week starter exercise program,” he explains. “We do an assessment of the current physical fitness and set goals. Then I design a fitness program that fits the fitness goals and abilities. Every four weeks they come back to weigh, measure and set new goals with a new fitness plan.”

There were challenges, of course. RaeEllen did not have a routine work schedule, which meant planning time to work out would be variable, despite the convenience of an on-site full-scale gym. “Who can work out during the day?” she questioned.

“RaeEllen was so locked in,” Jason adds. “I just knew that she was going to complete the Fit Quest program.”

“Jason showed me the equipment and how to do the exercises,” RaeEllen explains. “Then I would do those exercises on my own time. When I needed to move up weights or change the routine, I would meet with him again. In the meantime, I talked to him about what I was eating and showed him my food log.”

Again, it took dedication to continue, especially when RaeEllen stopped seeing results on the scale. “We went over my food log and he asked me if I was ready to give up sugar and soda and to start drinking more water,” she adds. “He promised me that in a week, I would start to lose weight again.” RaeEllen agreed to make more changes and came back the next week, down eight more pounds.

To be successful in the long-term, Jason followed a specific technique with RaeEllen. “We started chipping away at some of those things that were holding her back,” he says. “I like to start with small goals and then gradually make changes to the diet.”

By now, RaeEllen’s changes were a routine. “I would go to the BSA gym before work at 4 o’clock in the morning four days a week, shower and go to work,” she says. “On Saturdays, I would go to one of Jason’s classes.” To capitalize on her 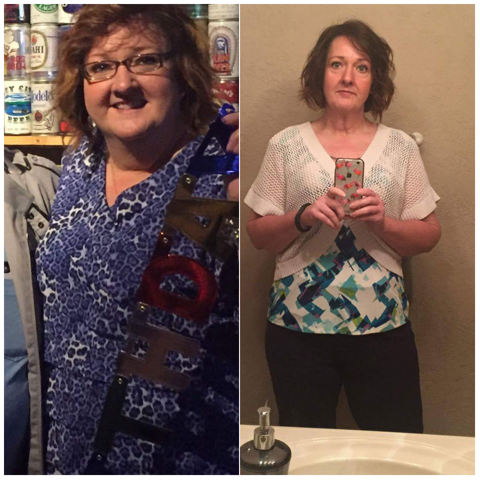 progress in the gym, RaeEllen attended nutrition classes on campus and reconsidered decisions in the Dining Center. “That was a challenge. They have excellent chicken tortilla soup, but the fried chips were not a good choice. Also, the burger bonanza was really fattening.” She visited with nutritionists about foods she had started to prepare at home for the first time. “I met with Amanda Ast, one of the BSA nutritionists, about making quinoa. This is the coolest thing. All of the sudden there was quinoa in the Dining Center! They also have vegetable trays and healthy snacks. Instead of going to the burger bonanza, I go to those cases first.”

RaeEllen is starting a new year with a new goal, having accomplished her first weight loss goal. Backed by the success of her wellness journey over the last nine months, she’s ready to achieve, once again with the encouragement of the clinical informatics team. “They’re inspired and happy that I stuck with it,” she adds. “I just needed that little push.”

“RaeEllen is Fit Quest’s best success story,” Jason adds. “She is an inspiration to people throughout the hospital. They’re coming in to see me because of her success.”

Need your own inspiration? Join us Friday, January 20 for our live Facebook event. We will be discussing health and wellness in the New Year! Click here to join the conversation.

Knowledge and Prevention of Cervical Cancer

Tips for People with Diabetes this Thanksgiving