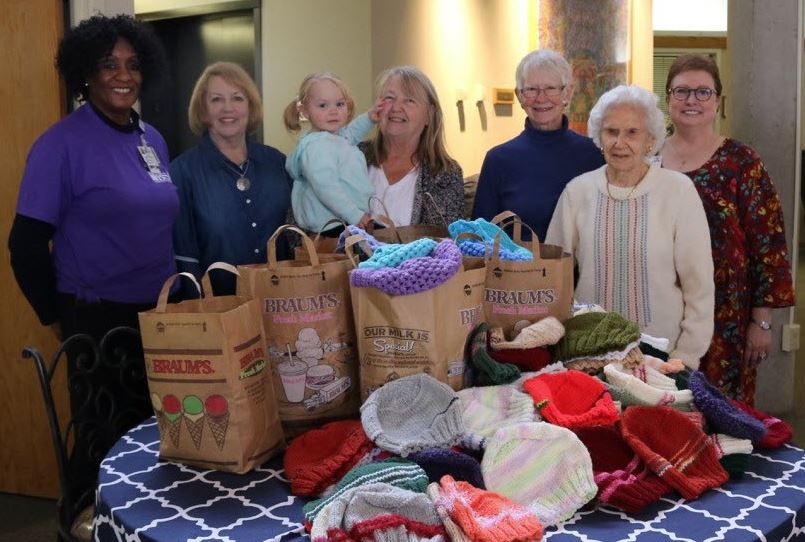 Wenonah Martin, a 102-year-old volunteer at BSA Harrington Cancer Center, doesn't let her age slow her down. Each year, she donates hand-made hats for cancer patients to keep their heads warm.

Wenonah has dedicated 20 years of service volunteering at BSA Harrington Cancer Center and over the last few years, Wenonah decided to donate 150 crocheted hats for the patients to wear. Each hat takes, on average, four to six hours to create. Add it all up, and that’s about 750 hours of labor per year.

“This is my sixth year donating hats,” Wenonah shared. “I work on them all the time. Any time I am sitting down, I am making hats.”

Wenonah’s production of hats came to a halt when she broke her hip earlier this spring.

“I couldn’t get quite as many hats made at that time,” Wenonah said. “I told my friend at church, Barbara Williams, about it and she started making crochet hats to help me.”

Barbara said that she didn’t have much experience crocheting hats before this year, but wanted to assist Wenonah in her goal.

“I just wanted to help Wenonah,” explained Barbara. “I think Wenonah has warmed more heads in the Panhandle than anybody. “

With Barbara’s help, Wenonah exceeded her goal this year with a total of 220 hats donated. Barbara says she is excited to continue helping her friend give back to BSA Harrington Cancer Center.

“It feels good to be able to do something for somebody else, especially when we don’t know when we might be in that position ourselves” Barbara shared.

Wenonah says that volunteering at BSA Harrington Cancer Center is a blessing. She is filled with joy knowing that she is giving back to the community.

“It feels so good to give back,” Wenonah shared. “Some people have called me to tell me how much they appreciated them and that they are wearing them to church. I’m working on next year’s hats already!”

Interested in volunteering at BSA Harrington Cancer Center? Click here to learn more and find out why BSA is a Great Place to Volunteer.