‘We Don’t Suit Up to Lose’: A Panhandle Man’s Story of Survival 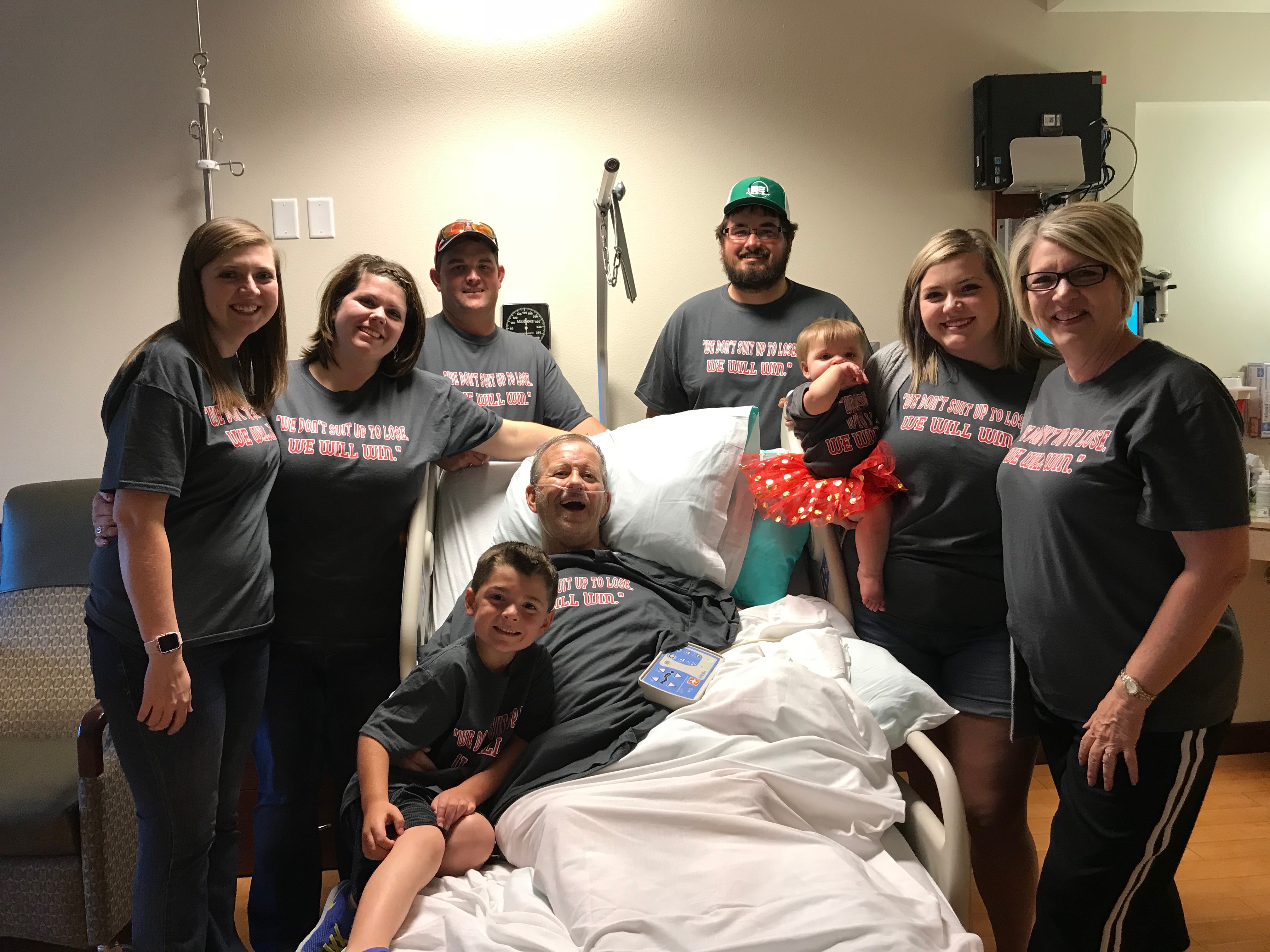 Rob Lackey, 60, had plans to meet his wife and their youngest daughter for lunch on Aug. 12, 2017 in Amarillo when he suddenly felt tired and not himself.

Contemplating whether or not he should head back to their home in Panhandle, Lackey decided to go to the emergency room at BSA Hospital. “I can still show you where I parked my pickup in the parking lot,” Lackey says. “I walked in the entrance which was a little bit of a slope. By the time I got in there, I was a little bit out of breath.”

When the emergency room staff asked what brought him in, he explained that he didn’t feel like himself, had tightness in his chest and was abnormally winded from walking.

Immediately, Lackey was treated in the ER and hooked up to an EKG. “The next thing I know, there’s a doctor coming by and he said, ‘You’re going to the heart lab right now.’”

It was determined that Lackey was having a heart attack.

Before making it to BSA’s Cardiac Catheterization Lab, Lackey’s heart stopped and he needed to be resuscitated. In the midst of doctors and nurses working to revive him, the Lackey family was told that he may not survive. Despite the odds, Lackey survived and was immediately taken to the Cath lab.

During cardiac catheterization, it was discovered that Rob had more than six blockages and would need surgery the following morning.

On Aug. 13, 2017, Lackey had coronary artery bypass surgery at BSA Hospital. “The surgeon did five bypasses and he tied two of them together to take care of the six blockages,” Lackey says.

It was two days after bypass surgery when BSA nurses discovered Lackey had a stroke in his sleep. “They thought a blood clot from the bypass might have broken loose,” he says.

“One of the doctors came by, and of course you know when you have a stroke they have to tell your family that there are certain things you may not ever be able to do again,” Lackey says. “One of my son-in-law’s said, ‘Well you don’t know him very well. He’ll walk out of here.’ ”

His family and faith guided Lackey as he began therapy at BSA.

“We had family shirts throughout this adventure and on the front of it says, ‘We don’t suit up to lose,’” Lackey says. “When people would ask us what that means, I’d say, ‘I’m not going to quit and I’m going to get better for myself and my family.’”

During this time, BSA’s therapy team became a second family to the Lackeys. “I can’t say enough good things about them. They are just beautiful people and sweet spirited people. They are encouraging and they know what they’re doing.”

While Lackey was slowly regaining his strength back at BSA, his daughter Rebekah, a student at Texas Tech, had a surprise for her parents. “Students were encouraged to submit nominations for Parents of the Year,” Lackey says.

The Texas Tech Parent of the Year Award recognizes parents who have made a significant impact and contribution to the life of a Texas Tech student. The Lackeys were invited to accept the award on Sept. 29, 2017 at a Texas Tech football game.

“I said to one of my therapists: ‘Emily! I need walk on out to a football field on Sept. 29.’ And her first reaction is, ‘Rob, you’re crazy!’’’ Lackey responded with, “We don’t suit up to lose.”

Losing was not an option for Lackey, who had an idea on how to prepare his body to walk out on the field for the big day.

And so, Lackey and his therapy team started walking on the turf outside BSA every day. “I was walking up to 200 feet without taking a break at this point in my rehab,” he says.

Three days before the football game, Lackey’s health took a turn for the worse.

“I was in the therapy room and we were working on practicing what to do if I fall,” Lackey says. At that moment, he collapsed and it was determined that his aorta dissected.

An aortic dissection occurs when the inner layer of the aorta, the largest blood vessel in the body, tears. “It tore itself apart from top to bottom. It was destroyed,” Lackey says.

An aortic dissection is a rare medical emergency affecting about 30 in 1 million people each year. Lackey needed immediate aorta dissection surgery, which would take place in another facility in Plano, Texas.

“This was another one of those times where my family was told that they didn’t think I would survive,” Lackey says.

“That night in Amarillo, it was really stormy and the air ambulance could not fly,” he says. “We couldn’t get to Plano, so God sustained me an additional 24 hours.”

Lackey survived through the night and was able to receive emergency surgery the following morning.

Unfortunately, Lackey was unable to walk out on the Texas Tech football field to accept Parents of the Year award. Lackey’s daughters accepted the award on their parent’s behalf while he was recovering in the ICU.

Lackey’s survival of the medical conditions he faced, including the aortic dissection was a miracle. “My wife and family are the really strong people. This has been a family adventure for sure. God’s timing is always perfect. He has given us strength and encouragement to understand that we have all of our confidence and trust in the Lord God.”

After 97 days away from his home and exactly one week before Thanksgiving, Lackey returned home. “The first night that we were home, I probably told Terri one hundred times, ‘the living room has never looked better.’”

Fast forward a year, Lackey is feeling stronger every day and is walking up to 2-4 miles a day. “I am physically doing so much better and have been driving since the spring. My cardiologist calls me the ‘miracle man!’’’

Lackey has returned to BSA to visit with the therapy teams, nurses and doctors who all contributed to his recovery. “We love them and we keep in touch either by text, phone or Facebook,” Lackey says. “The BSA family has become an extended family for us and they always will be.”

“My family and I are so thankful for the doctors, nurses, therapists and every staff member at BSA. The only floor of the hospital that I was not on at one point or another was the third floor, and they figured out pretty quick that I was not pregnant,” Lackey says with a laugh.

“I know that BSA Hospital was founded on Christian principles and on the principle of giving care and love to everyone,” he says. “That is still part of the mission of BSA – to be compassionate, caring and loving. We certainly experienced that.”