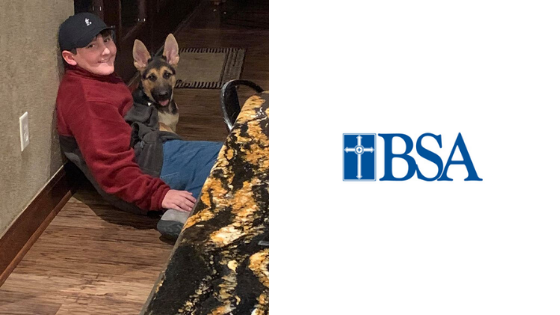 BSA’s Pediatric Unit recently received a new gaming system that patients will be able to use during their stay, thanks to a donation from a former patient.

John Hare, 12, was admitted to BSA Hospital due to a severe allergic reaction in November of 2019, just a few days after the passing of his father.

“The funeral home brought all of the flowers to us, and so we had all of these flowers in our house,” said John’s mother, Tina Hare. “He kept having issues with his asthma all day. I was thinking it was just allergies, so I kept giving him breathing treatments. But after one breathing treatment, he would have to have another one.”

Feeling concerned, Hare took her son to his pediatrician.

“We couldn’t get his oxygen saturation levels above 85, even after a breathing treatment,” Hare said.

When his pediatrician recommended seeking hospital treatment, Hare knew immediately she would take her son to BSA Hospital.

“BSA is absolutely our hospital of choice,” Hare said. “It’s clean and has incredible nurses and staff.”

After being admitted, John was brought to BSA’s Pediatric Unit.

“Everyone greeted us and got us in quickly. They had to put an IV in, which went smoothly, and he didn’t cry or experience pain. They immediately started him on oxygen and breathing treatments every two hours.”

When a nurse brought in a gaming system for John to use, the 12-year-old was delighted.

“We never allow gaming systems at home, and he only plays them when he goes to a friend’s house. So in walks a nurse with this gaming system and he thought it was the best thing ever,” Hare laughed. “He was so excited. It was a fun time for him.”

Hare was pleased with all of the staff who helped make her son’s experience pleasant.

“The nurses were all wonderful and the techs who came in to help us were fantastic. To be in the hospital, you wouldn’t expect it to be a great experience, but it really was.”

John remained in the BSA Pediatric Unit for four days until he was well enough to go home.

Following his experience at BSA, John decided he wanted to give back. He used his own money to donate a brand new PS4 and portable gaming monitor to the BSA Pediatric Unit.

“It was all him,” Hare said. “I have a remarkable son. He is a really great young man and I am exceptionally proud of him.”

On behalf of all BSA staff and BSA’s Pediatric Unit, thank you, John, for your kind donation!