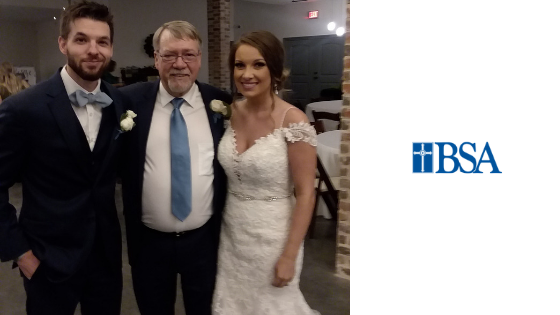 Russ Chisum, 64, was on his way to meet his wife and sister in Panhandle, Texas, when he began experiencing severe discomfort in his chest.

“During the drive I stopped for gas and when I got back into the car, something felt very wrong,” Chisum said. “It started feeling like there was a belt tightening around my chest.”

This was not his first time experiencing discomfort in his chest. In the weeks prior, Chisum could barely catch his breath while walking or climbing stairs.

“I could barely carry a bag of groceries up to our apartment,” Chisum shared. “Walking in and out of work was just as difficult.”

“I walked into my sister’s house and said I have never felt this bad in my life,” Chisum said. “Apparently I had no color in my face.”

After explaining his symptoms to his wife, she quickly dialed 9-1-1. Chisum was transported by ambulance to BSA Hospital. It was determined that he had suffered a moderate heart attack.

“I saw the ER doctor, who then called the cardiologist on duty,” Chisum shared. “Things happened quickly. I was brought to the BSA Cath Lab in less than 30 minutes. Everyone was professional, reassuring and confident. They just knew what they were doing. ”

“Everything was textbook,” Chisum shared. “My doctor came out of surgery and told my family it went well.”

Chisum is feeling stronger every day and is pleased with his results following surgery.

“The difference is amazing,” Chisum said. “I lost a lot of weight and continue to try to keep it down. I can’t do everything I did at 35 now at 65, but I’m doing more than what I was doing a year ago.”

There is nothing like the power of prayer and confidence in your physician, according to Chisum.

Chisum is thankful for the exceptional care at BSA that made him feel like a priority.

If you are experiencing the symptoms of a heart attack, call 9-1-1 immediately and take an ambulance to BSA Hospital. To learn more about the BSA Heart and Vascular Center, click here.