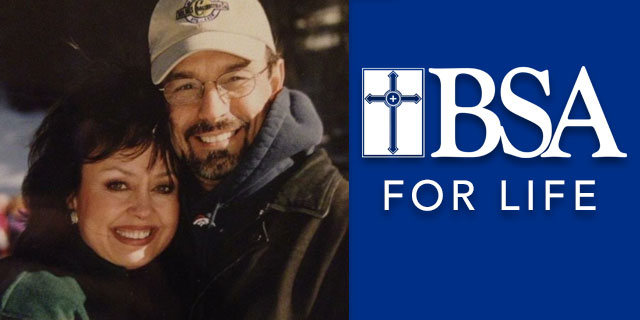 The morning of September 21, 2013 Gilbert Solano headed to work like any other normal day. He arrived at work, grabbed a cup of coffee and sat down at his desk. After a quick break to the restroom, something was a little off as he sat back down. “I felt a little strange,” he recalls. “I tried to shake it off. I thought I’d walk around to get the blood flowing. I tried to get up, but couldn’t. I didn’t have a left leg or left arm.”

Gilbert was suffering a stroke at the age of 65.

“I called my wife, Jan, to come pick me up and we went straight to BSA,” he says. “At this point, I was fearful, because I didn’t know what was going on, but I thought I might be having a stroke.”

“He was showing signs of weakness,” Jan remembers noticing when she picked him up from work. “He was able to walk, but veering to the left.”

When they arrived at the BSA Emergency Department, emergency medical staff worked quickly to diagnosis Gilbert’s condition. A CT scan was ordered to look for hemorrhaging in his brain. The scan of his head did not reveal the carotid artery that had torn in his neck.

“I had noticed he didn’t have any movement on his left side,” Jan observed. It reminded her of a family member losing control of their right side after a stroke. “I asked him if he could lift his left arm and he couldn’t.”

Jan alerted the staff. Gilbert was being treated with clot-busting medication. However, as his symptoms worsened, they stopped the medication and his physician ordered a CT scan of his neck, which indicated the problem with his carotid artery. “Then he started to lose his facial control and speech,” Jan says.

Quickly the staff worked to treat his stroke and repair the carotid artery. Jan says throughout the whole process she was in awe of her husband’s demeanor. “He had the most amazing attitude about it from the very beginning,” she says. “He kept assuring me that everything was going to be OK.”

His light-hearted spirit was matched by a sense of humor that his doctors and nurses also observed, Jan says. “The doctors and nurses fell in love with him,” she shares. “He was always assuring everyone else that he would be fine.”

After two days of hospitalization to treat his stroke, Gilbert was admitted to BSA inpatient rehabilitation. For more than six weeks he worked with a team of physical therapists, speech therapists and occupational therapists to try to gain back control of his left side. He wasn’t walking and had no movement in his left hand or control of his left leg. The therapists immediately started working with him on walking with assistance and Jan says she noticed improvement within a few days.  “We joined forces with his therapists and made him do the therapy all the time,” she jokes.

In November, Gilbert was transferred to the Transitional Learning Center in Lubbock. There he spent nine more weeks of intensive therapy. “His cardiologist told us that he would never walk again,” Jan says.

“I walked out!” Gilbert exclaims of the day he was discharged to go back home – four months after his stroke.

“He is still gaining ground,” Jan says of the work Gilbert has continued since coming home. He goes to BSA outpatient rehab and receives additional therapy at home with a home health nurse and therapists.

Throughout this experience, Gilbert says the people at BSA have made all the difference.  “They always maintained my honor and integrity,” he adds. “That was huge for me. They treated me with kindness, care, compassion and with professionalism. I fell in love with all of them.”

What Stroke Takes Away